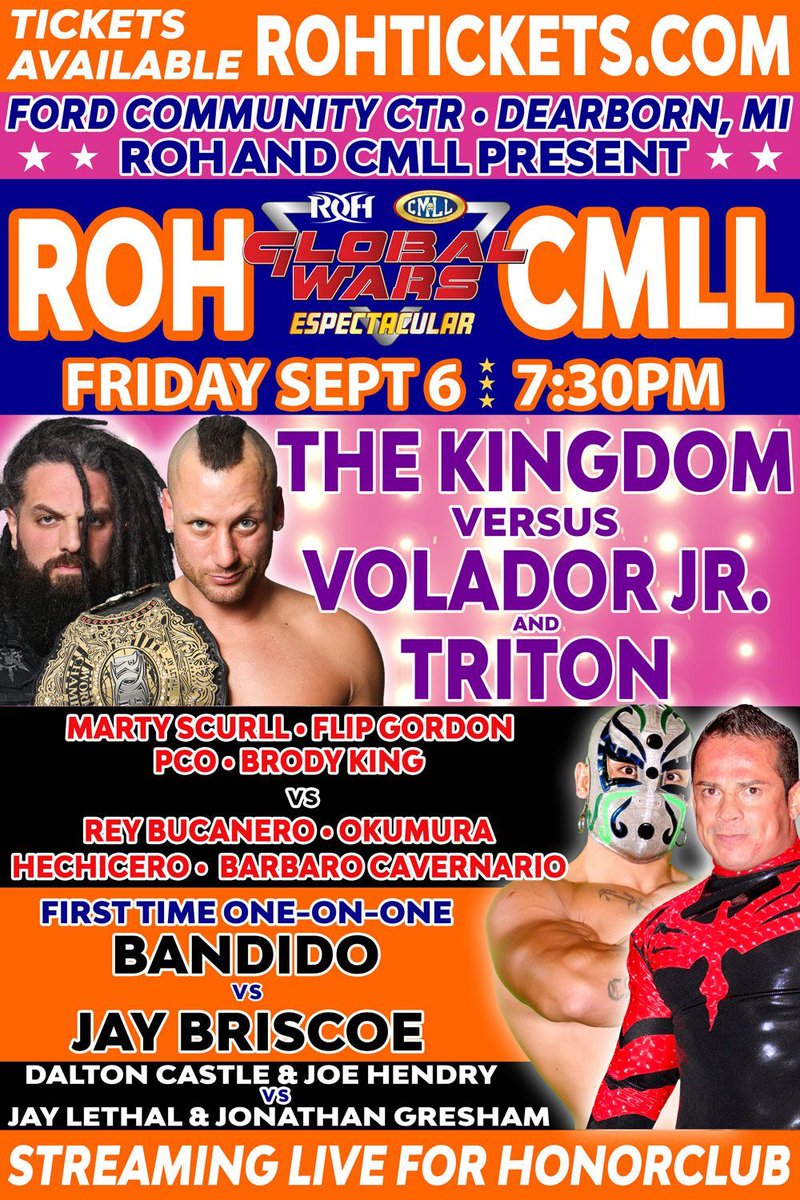 In December 2015, professional wrestler Matt Taven suffered
a serious injury to his left knee that one doctor told him
could keep him out of the ring for more than two years. The
injury came at a time when he and his partner were making
waves in the industry and Taven appeared to be ascending to
the top of Ring of Honor wrestling.

However, shortly after the injury, Tavens partner -- now
known as Mike Kanellis in WWE -- left ROH, leaving Taven
with no clear path when he would eventually return. During
his time away, Taven says he evaluated his career and
decided he would no longer keep his mouth shut and would
make it clear he saw himself as a top guy in the industry.That determination and mindset culminated in Tavens
crowning moment this past April when he won the ROH World
Championship at Madison Square Garden, arguably the most
sacred arena in professional wrestling.

Its still very surreal. To tell a 6-year-old boy who grew
up watching events in MSG that you were going to win the
title at MSG ... Its something you fantasize about and you
look back at it like a movie, Taven said in an interview
with MLive this week.

Five months later, Taven is still champion and is set to
lead ROH during a tour of the Midwest this weekend that
begins in Dearborn Friday night at Dearborn Performing Arts
Center. The tour is special for the company and for Taven in
particular because it will also feature the stars of CMLL a
Mexican wrestling company that is the oldest professional
wrestling company in the world.

This loop is special because its not just the best
wrestlers from ROH, youre also seeing some of the best from
Mexico. And youre seeing a clash of styles that you dont
always see," Taven said.

What makes the Mexican style so unique is the athleticism
and ability of the luchadors, who showcase high-flying moves
combined with nonstop action-filled matches that arent
typically seen in the U.S. The tour is also special for
Taven, whose first matches after returning from injury were
with CMLL.After rehabbing for nine months, Taven returned in September
2016 -- a different doctor helped him through the process to
recover more quickly -- and has been working with CMLL
consistently since then. Being in Mexico after the injury
gave Taven the confidence he needed to realize he could
achieve the heights of success he saw in his mind.

And although he represents ROH as champion, he says CMLL has
a special meaning to him because of how that company helped
him in his return to the ring. He wants to prove to fans of
both companies that hes deserving of the trust officials
have given him.

I definitely have the kind of feeling of this is an event
where Im not only showing people why Im the champion, but
why I succeeded in CMLL," Taven said, adding the luchadors
are going to surprise people during this tour.

Theyre down in Mexico City just killing it every night. I
think this tour is going to do wonders to open peoples eyes
on how good the talent is down in CMLL.

Since becoming ROH champion, Taven has been on a torrid pace
defending the title, the same title that was previously held
by some of the biggest stars in the industry. Former
champions include WWE stars Daniel Bryan, Kevin Owens, Adam
Cole, Samoa Joe and current WWE Universal Champion Seth
Rollins.While Taven is proud to be on the same list as those guys,
he also says hes not satisfied just being one of the names.

One of my biggest concerns is defining my own legacy on
that list," Taven said. You dont want to be just another
name on that list, you want to stand out.

Standing out means traveling the world as champion and
defending the title as much as possible. That includes being
the first ROH champion to wear the belt in CMLLs home
venue, Arena Mexico.

It also means coming through with top-notch matches during
weekends like this one. Taven says he always feels pressure
to have the best match on the card, but during a loop such
as this he feels it even more. Having the best match can be
tough because of just how good the ROH roster is.

I truly believe ROH at a live show always lives up to the
moniker as the best wrestling on the planet," Taven said.

Tickets for Friday nights show are still available and can
be purchased here. If you want to see the show but are
unable to attend, the card will be broadcast on ROHs
streaming service Honor Club.
Share this article:
FacebookTwitterGoogle+