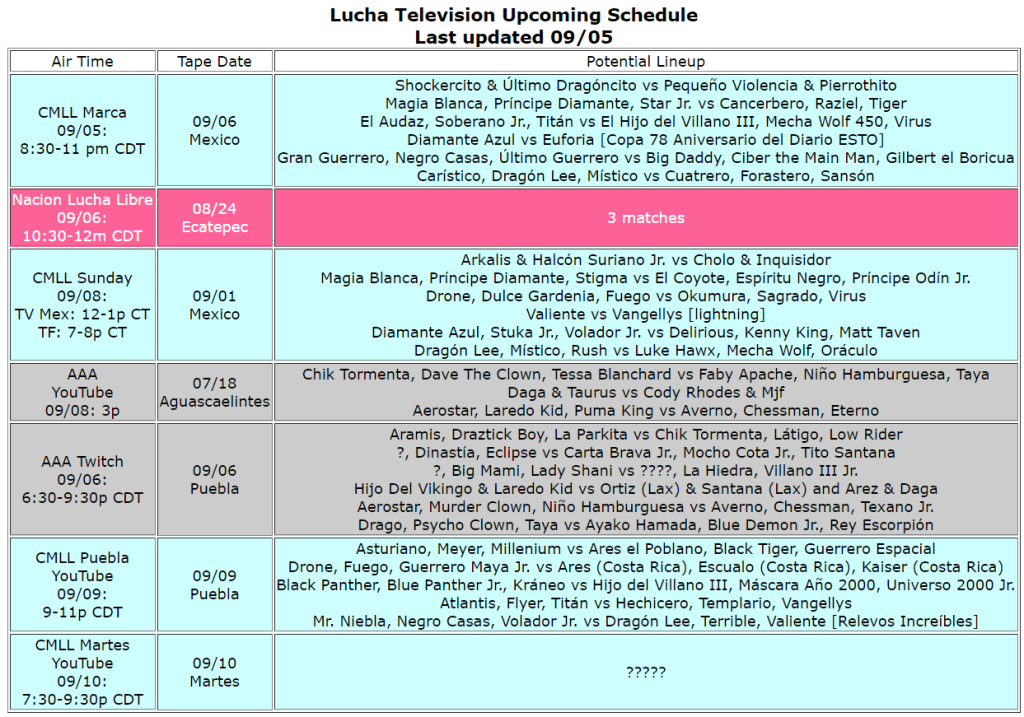 AAA is back on Twitch on Sunday night. (Dont get used to
it, its the only AAA on Twitch for September.) The card we
have is likely not correct since Dr. Wagner Jr. is still
missing and Hijo del Vikingo is still working. Dont think
one is replacing each other.

AAA on YouTube covers the Aguascalientes taping in just one
episode. Theyll be on TripleMania next week.

CMLL Sunday shows should wrap up the Rest of the World
appearances. This also doesnt include the CMLL wrestlers on
ROHs Honor Club all weekend long. For whats it worth, CMLL
did not air on TV Mexiquense last weekend and doesnt appear
to be on their schedule.

CMLL announced the full card for the 86th Aniversario show
on Informa.

Dragon Lee is a question mark; the WON had him in Las Vegas
on this date.

The CMLL hype for this card is theyre giving the fans two
apuesta matches and two championships, four big matches.
Maybe the additional relevos incredibles is the best example
of the problem with that: it definitely has something
attached to the match, but its hard to believe anyone cares
any more about seeing the mixed-up teams rather than the
usual people together. Its still about the same match.

NGD vs three random tecnicos should be good but the titles
mean so little that making it a champion match makes little
defense when the match comes out of nowhere. (Theres
actually a better version of the same match happening this
Friday anyway.) The Dalys/Marcela match seems to be a big
deal only to a small amount of people and the main event
didnt even seem appealing to those inside it. Quantity does
not outweigh quality.

The cage match is a compromise in storyline and probably
also in reality, a way to get to a match they didnt feel
comfortable promoting as a singles Aniversario main event.
There have been four cage matches in recent Aniversario
history. In recent years, the cage matches end with a one
fall singles match.

2011: Felino takes Rey Bucaneros hair
2010: La Sombra takes Olimpicos mask
2007: Blue Panther takes Hijo del Lizmarks hair
2001: Satanico takes Mascara Magicas mask
None of those matches wouldve worked on their own.
Panther/Lizmark is the closest. Blue Panther was more a long
time semi-main veteran than the legend he is now, but CMLL
very clearly didnt trust that match as big enough on its
own. Sombra/Olimpico wouldnt have worked as a singles main
event at all in 2010 and never did happen in a meaningful
singles match before or after. Felino/Bucanero might have
worked as a Homenaje a Dos Leyendas show and surely as a
lesser show but not an Aniversario show even with them being
on a reality show at the time.

Satanico is the biggest star of any of these guys at the
time of the match but he was already being moved down by
that point and Mascara Magica was an anonymous midcarder
before being pulled into a feud so he could be the guy to
lose his mask. CMLL did just run an Aniversario main event
of Gran Guerrero vs Niebla Roja, so the bar has been lowered
than it was years ago, but going back to a cage suggests the
ending match is not something CMLL felt safe promoting as an
Aniversario main event. Its never about the quality of the
match but instead the star power of the people involved.

That seems to rule out this cage match as a ruse to get to
Ciber vs Ultimo Guerrero. The match has been and would be
bad but that doesnt seem to be a factor. Ciber, UG, and
Volador losing their hair is important enough to be a
singles match against just about anyone. I would put
Cavernario in that group as well once you main event a
real match Aniversario youre a made man though I know
everyone doesnt agree on that.

That would leave Big Daddy, Negro Casas and Gilbert el
Boricua. Big Daddy losing his hair would be a deeply cynical
move. Im not sure if anything could run off the remaining
CMLL diehard fans but Big Daddy being the loser in the
Aniversario would be a stiff test. It really doesnt even
matter if Big Daddy is good or bad, hes only been around
for five minutes and hed need to drastically catch fire in
the next three weeks for a long time CMLL fan to care about
him losing his hair.

That leaves Negro Casas & Gilbert. If youve watched Ricky
Banderas in Lucha Underground or AAA or WWC, hes likely as
big a star as Ciber and Ultimo and the rest. The people in
charge of CMLL clearly do not seem him the same way, having
never gone strong with Gilbert since hes been there.
(Gilbert isnt close to what he was as Mil Muertes, but
neither is Ciber.)

Maybe CMLL doesnt seem him as big enough star to main event
an Aniversario show with, but would they give him a hair
payoff then? Negro Casas is a star, though one clearly near
the end. Hes so close to the end that he may not feel
comfortable doing a long main event, as most of his singles
matches go under ten minutes now. Hes also lost his hair so
many times and it hardly ever matters, but hes a big enough
name that CMLL can point to it as an important win both now
and later. (Selfishly, Ive always wanted to see the
Cavernario/Casas torch passing match. CMLLs unlikely to do
the feud, but this may be a way to get to that match.) I
think Casas fits the best as the person most likely to lose,
though its not a cinch.

The idea is this Aniversario best card CMLL has to offer.
Its hard to make a case that Stigma & Rey Bucanero are
either among the best CMLL has to offer or the most
deserving. (Its impossible to make that case for Big
Daddy.) Theres a lot of unhappiness. Blue Panther Jr. and
Zeuxis made negative comments on Twitter Wednesday night
which were later deleted. There are stories of other issues
beyond programming behind the scenes that are angering
luchadors. The transition to a post-Paco Alonso era has not
gone smoothly and there are rumors of others who maybe be
following Sangre Azteca & Triton out of the promotion. If
this sounds troubling, it is because it is troubling.

One of the reasons given for Cavernario pulling off of PWGs
Battle of Los Angeles tournament was CMLL needed him for the
Aniversario show. That didnt quite make sense at the time
because no one believed the Aniversario show was on the
20th. Its still not, its the week after, and maybe the
idea actually was CMLL needed him for the build-up that
match. That would suggest CMLL knew they were going end up
with this cage match a few weeks ago, even though the entire
build for it came just in the last few days. It was CMLLs
choice to wait until the last minute to set up anything but
they might have decided it was their end point for a while.

Diario Basta has a column by Salvador Trejo, saying himself
and the papers sports editor Rodrijo Mojica, were blocked
from attending the CMLL Aniversario pres conference by Julio
Cesar Rivera. The paper decided they werent going to let
CMLL dictate their coverage and did not cover the press
conference. People in CMLL generally claim to not read or
pay attention to outside coverage, though someone there must
be finding the negative stuff and passing it around.

Other media people have been called into CMLL for
questioning about something theyve written or banned
entirely in the past, going back to SuperLuchas being banned
over a decade ago. JCR and Ultimo Guerrero obliquely
referenced and complained about negative reaction to the
Aniversario card on CMLL Informa yesterday. For Diario Basta
in particular, a recent lucha libre article was critical of
not following up on the Rush vs LA Park rivalry, so maybe
thats what got them banned.

An Abismo Negro Jr. is listed on the 10/11 AAA non-
televised show in Aguascalientes. My understanding is Abismo
Negro Jr. is slated to be one of the surprise luchadors on
Sundays taping. The name Ive heard for the role is a
familiar person, but I feel safer waiting for Sunday to see
if AAA actually goes with it.

Abismo Negro was a top rudo for AAA from 1997 to 2009, one
of the iconic characters of the promotion during the period
between the initial boom and Antonio Pena passing away. Hed
earlier been tecnico Winners, one of the original few who
jumped from CMLL to start the promotion. He was a
charismatic evil-doer, maybe best compared to Pentagon Jr.
in terms of personality if not as a wrestler, who crossed
over into the mainstream and had some memorable moments with
people outside of wrestling coming into AAA. Abismo Negro
dealt with drug issues and passed away in a strange and sad
situation back in 2009.

AAA shot a pilot for a secondary TV show in 2011 at Arena
Lopez Mateos called El Regreso del Abismo, where the
winner of a tournament would become the new Abismo Negro.
That pilot never made air. The reaction to AAA bringing back
the original Abismo Negro was harshly negative, though I
suspect the show didnt happen more just because AAA
couldnt line up a sponsor for it. I dont remember this at
all, but my post at the time mentions AAA had even said
there would never be a new Abismo Negro after the original
one had died. Among the 12 luchadors who qualified for the
tournament were Argos, Kronos (now Kill Korton), Hijo del
Pirata Morgan, Black Mamba (current exotico Mamba who was a
ninja), and Dark Dragon/Pentagon Jr. himself. I wonder how
the last seven years wouldve gone if he ended up with the
Abismo Negro Jr. character instead.

The AAA Aguascalientes also has a Raptor listed. Im unsure
if the old Raptor has quickly returned to AAA or theyve
just put someone new under the mask. This show also has the
LA Parks vs Blue Demon/Rey Escorpion and the Lucha Brothers
vs Laredo Kid/Golden Magic, so someones paying a lot for
these shows.

Arena Coliseo Monclova on Monday has a team of Angel o
Demonio & Blue Demon, two people famous for using blocks in
their matches. Angel O Demonio has been loud about Demon
stealing the bit from him, though Angel o Demonio is loud
and doing a bit about most things.

Violento Jack will be on the 10/03 Lucha Libre Vanguardia
show. He says its his only date in Mexico for the time
being.

Lucha Talk has a new edition of the podcast.

Pueblas Ares is back for the first time since May, the same
show as the Costa Rica Ares and his crew are back. They
wont be in for long; theyre headed to Japan on the 15th
for Mr. Cacao. Drone faces them here and then heads to Costa
Rica on the 28th.

The main event certainly suggests theyll be running Dragon
Lee/Volador II on 09/16. Except, Dragon Lee is already
booked in Arena Lopez Mateos that day. He might be able to
make both at the normal Arena Puebla start time but theyre
planning on starting early for the holiday. Not sure how
thats going to work. I do think that 09/16 Puebla show is
now airing since CMLL doesnt appear to be running Arena
Mexico that day after all.

Flying in Michael Elgin to have a match where Ciberentico is
not going to want to do Michael Elgin stuff is an
interesting way to set money on fire. I cant complain about
having all the Tigers face off though.

Super Nova (or the people who make the posters) appears to
be stylizing his name as Supernova in this indie run. Im
trying to keep up.
Share this article:
FacebookTwitterGoogle+